5 ELEMENTS – THIS IS ONE OF THE MAIN THEORIES OF CHINESE SCIENCE. IT IS THE BASIS OF CHINESE PHILOSOPHY, PSYCHOLOGY, ASTROLOGY, ARCHITECTURE, AND OF COURSE MEDICINE.

Ancient Chinese science based on a few central theories with interpenetrating influence on one another. It includes Tai Chi – talking about the polar energies of yin and yang, the book I Ching or Yi Jing, which helps to predict the future, and the third theory is the five elements.

Today, the most common thought is to refer the five elements as five kinds of drivers. They represent five different states of the flow of vital energy “qi”. They also demonstrate the transition from one state to another and the mutual influence of the different states to each other.

The five elements in Chinese philosophy: metal, wood, water, fire and earth. Each of the elements are particular energy states, and part of the life stream around us. Wood: spring, swollen buds. Fire: summer and bloom. Earth: the center of balance, the changing seasons and the stage of maturation. Metal: fall, fading. Water: winter hibernation.

The transition of the five elements from one state to another is a dynamic and smooth process. It is embodied in our environment, the flow never stops. Each change of the flow, such as quickening or slowing down, affects the entire circulation process and the transition from state to state.

The theory of the “Five Elements” shows two cycles of interaction between the various elements. The first is when every element creates and feeds an other element of the circle: wood feeds fire, fire creates land (Earth) (ash), land forms metal in its interior, metal produces water and water nourishes wood. Another cycle shown in parallel is deterrence (destruction) – it explains how the five energy curb each other: wood affects the earth with its roots, the soil absorbs water, water extinguishes fire, fire melts metal and metal chops wood.

Many figures of five elements are a five-pointed star inscribed in a circle. The circle represents the cycle of creation, which creates and nurtures – it feeds the next element, while the star represents a cycle (destruction) in different situations. 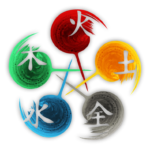 This cycle of creation and containment is the flow of natural processes that exist in our body. Five planets closest to us that you can see without a telescope, are related to the five elements: Mercury – water, Venus – metal, Mars – Fire, Jupiter – wood, Saturn – fire. Chinese astrology uses the five elements for predicting the fate of man. Cardinal points also correspond to the five elements: wood – symbolizing the East, Fire – South, Land – Center, Metal – West, Water – North. Each element also corresponds to a different color, weather, fruits, crops and livestock.

An additional aspect is associated with the five elements – our feelings. Anger – Wood, Joy – Fire, Love – Earth, Sadness – Metal, Fear – Water. We see that joy nurtures love, but can lead to suffering. On the other hand, this love can also be a deterrent fear.

Confucius (551-479g.g. BC) tied the five elements with the five human virtues: compassion, honesty, justice, wisdom, and faithfulness, and each corresponds to one of the five elements. The wood is a symbol of mercy. Justice bonds to the metal as well as hardness and durability. Civility refers to water as a sign of modesty. The fire represents wisdom, combined with wit. Fairness is for the element of Earth and warns hypocrisy. From the above it is clear that honesty creates fairness, courtesy and mercy.

In our body the five elements play a more important role. Many aspects of Chinese medicine is based on the five elements and their combinations. The internal organs are classified according to the five elements, and thus, you can see the relationship between power and restraint between them. You can study the impact of environmental changes on the functions of the body, for example, the effect of the change of seasons or cycles per day.

Traditional Chinese medicine looks at your body as a whole. We are healthy when in our body there is the right balance and circulation of Qi. Changing the function of an organ, constitutes a violation of the free flow of energy in meridian1, which is the organ. The purpose and objective of traditional Chinese medicine is to restore the normal balance of energy in our body. Knowing the principles of interaction of the five elements, you can restore that balance and our body can heal itself, and there is no need for any pills or surgery.

In general, the theory of yin and yang and the five elements reflect the objective laws of nature. They are very important to explain the physiological functions and pathological changes in the body, complementing and building each other. They are based on centuries of clinical practice (bone and stone needles found during archaeological excavations suggest that acupuncture has been known and widely used already 5000 years ago).

1Meridian lines pass through invisibly the entire human body and carry out the circulation of vital energy, relate the specific organs or groups of organs. Each meridian is “responsible” for a particular organ or area of the body. According to the theory of traditional Chinese medicine, the human body has got 12 main meridians which are divided into two groups of six meridians, yin group and the group of Yan.